Kepler Update: Some Progress Made 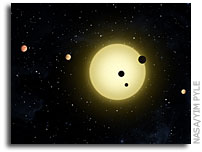 Kepler Mission Manager Update: Initial Recovery Tests, NASA
“The initial test began on Thursday, July 18, 2013, with RW4. In response to test commands, wheel 4 did not spin in the positive (or clockwise) direction but the wheel did spin in the negative (or counterclockwise) direction. Wheel 4 is thought to be the more seriously damaged of the two.
On Monday, July 22, 2013, the team proceeded with a test of RW2. Wheel 2 responded to test commands and spun in both directions.”
Marc’s note: It looks like there has been some partial success however there’s still a long way to go before Kepler can be recovered to operate as it should.

Why Is All The Webb Stuff Important To Everyone Else, NASA?
NASAWatch On Deutsche Welle: Webb Images
NASAWatch On Al Jazeera: Webb Space Telescope
NASAWatch On TRT.World – Istanbul, Turkey
Categories