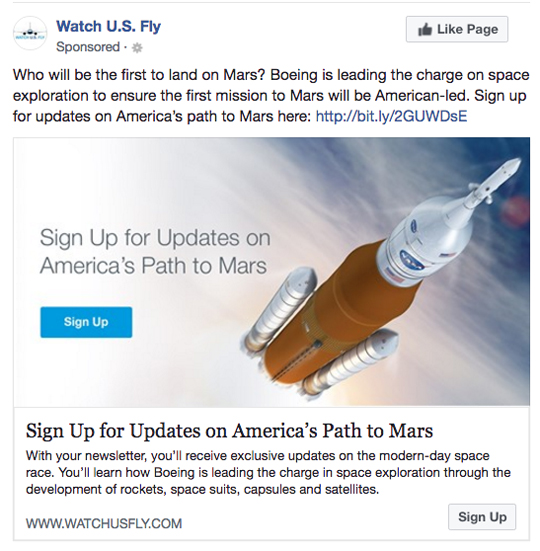 Keith’s note: We’ve all heard about those misleading campaign ads on Facebook. Well, while the campaign ads are under scrutiny big aerospace companies are quietly luring people to websites that are not what they seem to be at first glance.
This ad is currently running on Facebook. According to the coding embedded in the link it is “campaign=acquisition_newsletter_tier-two-space-race-b” and I am an “enthusiast”. When you go to the link it sends you to this page at watchusfly.com (registered by Boeing in 2016) which says “America is in a modern-day space race, and Boeing is leading the charge by building the spacecraft that will keep us in the lead. Boeing’s Space Launch System is the world’s largest and most powerful rocket. It is the foundation for America’s plan to send humans to Mars. Boeing’s Starliner is a re-usable capsule that will soon be the method NASA uses to send astronauts into space.” But when you go to this page for more information it says “NASA’s Space Launch System provides a critical heavy-lift capability, powering people and cargo beyond our moon and into deep space.”
For starters NASA is building the SLS. Boeing – along with Lockheed Martin, Aerojet, Orbital ATK, and Airbus are building the pieces. One page says it is Boeing’s SLS. The other says it is NASA’s. Which is it? And yes, Starliner will be sending human crews into space but it is not “the method NASA uses to send astronauts into space.” It is one of the methods – SpaceX is another method.

If you click “contact us” you get a page with lots of links. Go to About us which says “WHY JOIN WATCH U.S. FLY? In today’s global environment, our policymakers in Washington, D.C. and around the country need to be aware of how their decisions will affect the millions of Americans who directly or indirectly depend on our aerospace and manufacturing sectors. The Watch U.S. Fly community helps to bridge the gap and connect the personal stories of our advocates around the country to the policies, legislation and decisions that politicians are debating. And our voices make a difference.” OK, so this is actually a page that is trying to get people to lobby Congress. They don’t tell you that when you first visit, do they?
Then you can go to Take Action where they suggest that you can take action on “Support Boeing T-X Today.” So this is bait and switch. They tease space people in and then try to get them to support something Boeing wants Congress to buy to train fighter pilots.
And then if you go to the Blog link you see things like “NASA: SPACEX FALCON HEAVY IS ‘TOO SMALL’ FOR DEEP SPACE EXPLORATION“ which says “However, the Falcon Heavy failed to impress the spaceflight department at NASA. Bill Gerstenmaier, the head of spaceflight at NASA, said the Falcon Heavy is “too small” for NASA’s needs.” So this is not really a website that supports space flight as much as it is one that only supports SLS and Boeing defense products and dumps on SpaceX overtly using statements by NASA managers in those comments. If you sign up for the Boeing newsletter with Facebook “Watch U.S. Fly will receive: your public profile and email address.” So Boeing will know a lot about you that you may not want them to know.
The bottom of the page says “Watch U.S. Fly is a community of Americans that believes that America should lead the world in technological advancements. We realize that in order to maintain our edge, American aerospace must have the support of policymakers so they can continue to chart the future.” and then “Copyright © 2018 Boeing. All Rights Reserved.” Who is “we”? Who is this “community”?
People going to the page that this Boeing Facebook advertisement is slyly sending them to are getting misleading – and overtly incorrect and biased information. Contrary to the teaser line that this is all about “the path to Mars” (oops we’re gong to the Moon now) using imagery that overtly features the NASA logo, Boeing wants you to think about Boeing – and only Boeing.

Commercialization
Earth’s Most Powerful Rocket Flies. No, It Is Not SLS.