Trump’s space policy reaches for Mars and the stars, Op Ed, Space News
“A 21st century space policy requires a bold combination of public missions, commercial solutions and the agility to address real threats and real opportunities. To craft such a policy, government must recognize that space is no longer the province of governments alone. Ronald Reagan anticipated this revolution long ago when he signed the 1984 Commercial Space Launch Act. … Creating the technologies necessary to meet these goals would push us into the forefront of technological development and benefit our economy for decades to come. However, NASA cannot be expected to do this kind of 21st century Apollo-like mission if it is forced to accept outdated operational structures, contracting procedures, and bureaucracies created in the last century.”

Keith’s note: Former congresman, veteran space consultant, and Trump advisor Robert Walker is one of the two authors of this op ed. No mention is made of SLS, Orion, or ARM – yet a list of specific commercial companies and their capabilities – Orbital ATK, SpaceX, Blue Origin, Boeing, Paragon, Sierra Nevada, United Launch Alliance, Virgin Galactic and XCOR Aerospace is included. Moreover a warning against Apollo-like missions (#JourneyToMars) is made.

Election 2016
SLS To Mars: In Synch or Out Of Touch With Trump? 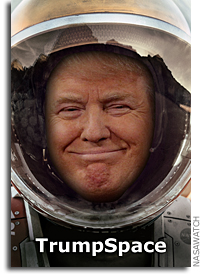 SLS To Mars: In Synch or Out Of Touch With Trump?