ISS Without Russia: Deja Vu All Over Again

NASA Puts One Space Station Propulsion Vehicle on Ice While Moving Ahead with Another, (2000)
“Meanwhile, the U.S. Propulsion Module (USPM) activity continues to move ahead. The USPM is a long term solution designed to provide reboost capability independent of that provided by the Russian Service Module. Unlike the ICM which was not designed to be refueled in orbit, the USPM would have all of the capabilities currently provided by the Service Module – without the pressurized living volume.” 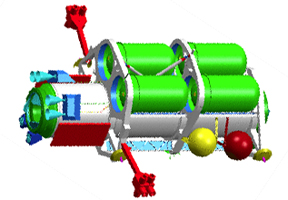 US Propulsion Module Why, What, When?
Alternate means for ISS GN&C/Propulsion system functions are required for potential loss of Russian partnership (Risk of unfriendly break-up)
NASA’s 1999 Plan To Splash ISS
“NASA has always been required to have a way to bring the ISS back to Earth once its mission is completed. This briefing first appeared online at NASAWatch.com in April 1999. The Propulsion Module mentioned in this proposal was never built. It was being considered when Russia’s delays on delivering the Service Module to orbit began to mount.”

57 responses to “ISS Without Russia: Deja Vu All Over Again”

Commercialization
Will Boeing Ever Fly A Crew To ISS?

ISS News
NASA Is Looking For Ways To Deorbit ISS

Will Boeing Ever Fly A Crew To ISS?

NASA Is Looking For Ways To Deorbit ISS