What is NASA.gov's Actual Impact? 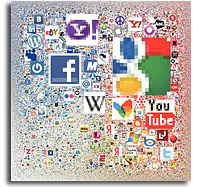 Reader note: I took interest in Nmap Developers Release a Picture of the Web from slashdot.org. The article says: “The Nmap Project recently posted an awesome visualization of the top million site icons (favicons) on the Web, sized by relative popularity of sites. This project used the Nmap Scripting Engine, which is capable of performing discovery, vulnerability detection, and anything else you can imagine with lightning speed. We saw last month how an Nmap developer downloaded 170 million Facebook names, and this month it’s a million favicons; I wonder what they’ll do next?”
So I took the liberty of searching for our beloved icon. Here is the link which finds the NASA logo in the mix.
According to the article, “the area of each icon is proportional to the sum of the reach of all sites using that icon. … The smallest icons–those corresponding to sites with approximately 0.0001% reach–are scaled to 16×16 pixels.” The NASA.gov came up at 232 232 pixels which, if I understand it correctly NASA reach = ((232^2)/(16^2))*(0.0001%) = 0.02%
Again, if I understand right, this means that 0.02% of the people who surfed the web in 2010 have visited www.NASA.gov. As a check on my interpretation of “reach”, Google is stated as 11,936 x 11,936 and therefore has a reach of ((11,936^2)/(16^2))*(0.0001%) = 55.6516% …or >1/2 of all users use Google. Which is certainly a believable calculation.

Artemis
NASA Tries To Fix A Webpage By Breaking It

NASA Tries To Fix A Webpage By Breaking It