Space Force Comes In Many Flavors At Varying Costs

White House Seeks Alternatives to Independent Space Force, Defense One
“The four options, according to one of the officials, include: 1) an Air Force-owned space corps that includes only Air Force assets, 2) an Air Force-owned space corps that also takes space-related troops and assets from the Army and Navy, 3) an independent service that takes from the Air Force, Army, and Navy, and 4) an independent service that takes from the three services plus parts of the intelligence community.”
The creation of a Space Force would cost less than $3 billion, according to a new report, Washington Post
“President Trump’s Space Force, a proposed military department dedicated to fighting war in space, would cost the Pentagon $1.5 billion to $2.7 billion in additional money over five years, according to a study released this week by the Center for Strategic and International Studies, a Washington think tank. That estimate is far below the $13 billion price tag that Air Force Secretary Heather Wilson recently reported to Pentagon leaders and is certain to fuel the debate over the cost and necessity of what would become the first new military service branch since the Air Force was created in 1947. While the White House has pushed aggressively for the establishment of the Space Force, which Trump has championed in rallies, a new military department would need to be approved by Congress. It is unclear whether there is enough support for it to pass.” 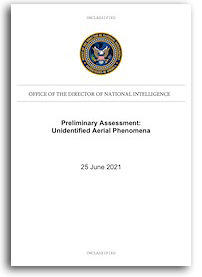 Astrobiology
That UAP/UFO Report Is Out. No Aliens. Yawn.

Military Space
The Space Command Food Fight Is Heating Up

That UAP/UFO Report Is Out. No Aliens. Yawn.