“The fight ended with President Bush handing the agency a long-desired new
mission to dispatch humans to explore the solar system — not stopping at
the moon, but venturing beyond.

However, that outcome was anything but certain during the highly secret,
months-long battle during which the White House, NASA, the Pentagon and
others in the federal government weighed in on where the U.S. should go in
space and how much money to devote to that.

That’s the story laid out in a new book by two aerospace reporters who got a
rare behind-the-scenes look at how high-profile policy gets made in the
White House. The book is scheduled for release this week. “New Moon Rising” promises to take readers inside the halls of NASA headquarters, and to some degree the White House, to watch the vision being
formulated.” 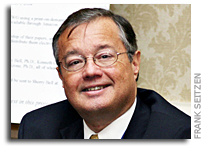 The First American Journalist In Space