Am I Just Seeing Things That Aren't There?

Editor’s note: Opportunity is curently moving over to the other side of Endurance crater toward a series of slopping rock formations. Browsing though the latest images I found this one here. Some things immediately caught my eye.

As I looked at the multiple layers in these rocks, a number of circular features started to pop out. They seem to be lain down within certain layers within the rock. I have no idea what they are. Maybe it is just the lighting angle – or perhaps another flavor of “blueberries” – since a number of blueberries can be seen close by. Perhaps what I see is a pebble caught in a layer that was cleaved in an odd way during the impact event that threw rocks around the crater.

Alas, having gone fossil hunting with my wife a week or two ago, (and being a biologist), that fossil ID program still seems to be running in my head. As such I often “think” I see things every time I look at a rock – be it on Earth or Mars. I don’t mean to start any rumors. Perhaps someone at JPL can tell me what this might be.

Don’t worry folks – I am not about to start claiming that I see faces or office buildings on Mars. This feature (below) has me intrigued. 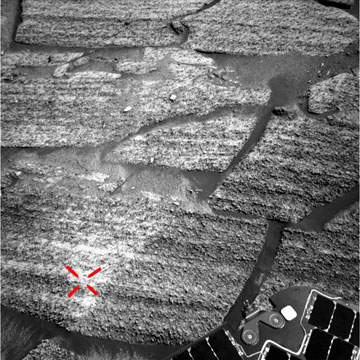