MPCV Is The New Way To Say Orion 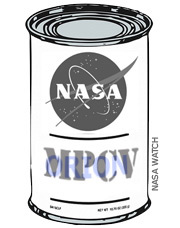 NASA Announces Key Decision For Next Deep Space Transportation System, NASA
“NASA has reached an important milestone for the next U.S. transportation system that will carry humans into deep space. NASA Administrator Charles Bolden announced today that the system will be based on designs originally planned for the Orion Crew Exploration Vehicle. Those plans now will be used to develop a new spacecraft known as the Multi-Purpose Crew Vehicle (MPCV).”
“This selection does not indicate a business as usual mentality for NASA programs,” said Douglas Cooke, associate administrator for the agency’s Exploration Systems Mission Directorate in Washington. “The Orion government and industry team has shown exceptional creativity in finding ways to keep costs down through management techniques, technical solutions and innovation.”

Marc’s note: Considering the hype if you will of the pre-release title “NASA Announces Milestone For Future Human Spaceflight” you might think the announcement would have more substance to it. We already new Orion was morphing into the MPCV. But here’s something interesting about the press release, the new MPCV will be able to do 21 day missions. I’m not sure how that equates to “Deep Space” though.
NASA will hold a telecon at 3:30 to brief the media. Sorry, the news didn’t seem to warrant broadcasting on NASA TV.

Marc’s update: For those longer missions NASA’s Doug Cooke said on the telecon they would assume another attached spacecraft. I’m glad he assumed that because in reading the press release there’s no mention of this. The release was poorly crafted.

Keith’s note: So .. this spacecraft does everything Orion was going to do – why not call it “Orion”? MPCV = “Its not “Orion” I just love it when these acronyms serve obscure things. “MPLM” currently means “MultiPurpose Logistics Module”. it used to mean “Mini-Pressurized Logistics Module” when we cut the original PLM in half during Space Station Freedom. But NASA would rather you not know that and think that this was the plan all along – hence the obscuring acronym. Indeed, the change from “Space Station Freedom” – to “International Space Station” is an object lesson. Space Station Freedom was, by definition an “international” Space Station from its very inception. Yet changing the name was done by NASA 9th floor types to somehow cite the addition of the Russians as making the space station more “international”.
Hmm .. no easily discernible vowels in “MPCV”. Maybe its pronounced “MipSiv” or “MeepSeev” or “Em Pee Cee Vee”. Remember how NASA removed the “E” from “LEM (Lunar Excursion Module)” and called it the “LM” instead because they did not like the way people were saying “LEM”?. Everyone still said “LEM” – including Neil Armstrong on Apollo 11 …
Oh well, “NASA” = Never A Straight Answer” and all that …

Marc’s update: Here’s what Cook had to say when asked about costs: “The cost on it is going to depend on how long it takes to phase out these things to some degree, we have invested a little over $5 billion in it and so we would continue to work on it from here, the cost will be coming down from what it might have been because we are looking for efficiencies, we’ve actually begin to implement a number of efficiencies on this, we still have to do the integrated cost and schedule to understand the phasing of it and that will effect how much it ultimately costs.”
Ultimately it’s going to cost a lot of money and right now NASA can’t answer this fundamental question. But the contract for Lockheed Martin goes forward.