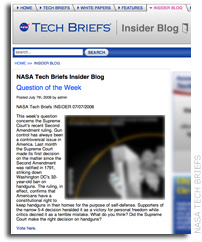 So, why is “an official publication of NASA” asking its readers [now taken offline – image on right shows original text] to vote on utterly non-space related questions like this:

[Click on image on right to enlarge] Regardless of where you stand on this issue, shouldn’t this “official publication of NASA” be focusing on NASA, aerospace, etc.? Then again, there is a shotgun aboard every Soyuz docked at the ISS – but they are Russian. Is NASA developing better space-qualified shotguns for Orion?

NOTE: this is NOT an invitation to post pro- or con opinions on gun control. Don’t bother because they will not be posted. If you want to weigh in as to whether this non-aerospace topic should be openly discussed by “an official NASA publication”, feel free to comment.

Editor’s update: But wait – there’s more. It would seem that the NASA Tech Briefs Question of the Week for several months (see examples below) has had absolutely nothing to do with NASA. You’d think that such “an official publication of NASA” would be trying to raise issues relevant to the agency among its readership – both to inform the readers of what NASA is doing – and educate the agency as to what the private sector is interested in. Guess again. Have a look below.

Help NASA TechBriefs out. What questions would YOU be asking of the private sector, industrial, and policy people who read this magazine and its website?

Editor’s 14 July note: If you check the comments section you will see that Joe Pramberger, President of Associated Business Publications International, tries to make the point that newsletter material published on a website with the explicit statement “NASA Tech Briefs is… An official publication of NASA” is somehow “NOT an official NASA publication” is confusing to say the least. He seems to want to have it both ways. FYI I have an archive of that page – which has now been removed. There was no disclaimer to that effect other than the generic one that applies to all material on the website.

1 July 2008 Question: “… What do you think? Should the U.S. develop magnetically-levitated railroads? Yes or no?”

23 Jun 2008 Question: “This week’s question concerns a plan to give airport security screeners police-style badges in the hope that it will convey an image of authority to passengers who may not currently give them respect.”

17 Jun 2008 Question: “Some believe the unemployment spike indicates a deepening economic recession. What do you think? Will U.S. unemployment rates continue to rise? Yes or no?”

3 Jun 2008 Question: “… Some economists and politicians contend that increased trading in oil futures by institutional investors is in turn creating upward pressure on prices. What do you think? Are speculators contributing to the rapid rise in oil prices? Yes or no?”

19 May 2008 Question: “As a result of high energy prices and/or increased awareness about the effects of global warming, do you plan to buy a more fuel-efficient vehicle?”

12 May 2008 Question: “Environmentalists argue that tapping those deposits could cause irreparable damage to the environment. What do you think? Should oil drilling be allowed in Alaska?