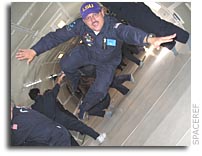 “Last week I had a chance to re-enter a world few have visited – a realm only space travelers- astronauts, cosmonauts and the like – normally get a chance to enter. Weightlessness. Zero Gravity. Floating. Astronauts get to live there. My visit was incredibly brief by comparison – no more than knocking on the door – but more than enough to leave an indelible impression on me. This is my second visit to weightlessness – my first having been exactly one year ago. My traveling companions: the same as last year – several dozen science teachers. My sponsor: The Northrop Grumman Foundation. My mode of transport: Zero Gravity Corporation’s G Force One.”

“At a time when NASA’s interest in developing the next generation of space explorers seems to have stalled and begun to fade, others have moved in to fill the gap. Northrop Grumman serves as the prime sponsor for the “Weightless Flights of Discovery program”. This project utilizes Zero Gravity Corporation’s Boeing 727 airplane (“G-Force One”) and staff to conduct a flight program for teachers.”

“After Matt had asked me to visualize a leap up into the rafters, I chuckled and told him that this all reminded me of yet another Star Trek moment. Specifically, a scene from the first episode of “Enterprise”. In this episode, everyone was learning to get accustomed to a new ship. The ship’s engineer was prowling around and happened upon one chamber where an ensign was sitting upside down – on the ceiling. This was odd given that the ship had artificial gravity (whatever that is).”