#WhatIsNASAFor and the Defending NASA 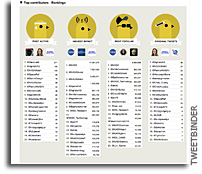 Keith’s note: According to this high level analysis of the impact of Twitter using the hashtag #WhatIsNASAFor between 7-10 February, a total of 17,597,370 impacts were made. On this chart Twitter impacts are calculated by multiplying the number of tweets someone makes times the number of followers they have. Personally I think “reach” and “impact” are more complex than this – but this gives you a general idea of the relative scale of impacts.
@NASA tweeting resulted in 17,597,370 impacts. @NASASocial produced 7,627,023. @NASAWatch produced 5,296,071 and @SpaceRef produced 1,632,662. However members of the NASA Social community and others were also responsible for a substantial number of impacts on Twitter as well. Of note is @AgilistaAG (Angela Gibson) who was the main power behind the mobilization of the NASASocial community. This is a new and growing trend.
This response is similar to what happened during the government shutdown when NASA was unable to talk about itself but Twitter users with the #WhatNASAMightTweet hashtag mounted a similarly large response. Its one thing to respond to matters of an urgent nature with surges of interest and support.
Also, FYI NASA did very little tweeting in response to #WhatIsNASAFor (@NASA only made 3 Tweets, @NASASocial made 7). Indeed, PAO and mission staff around the agency more or less totally ignored this activity on social media even though they were made aware of it internal to NASA. Had NASA gotten off its collective butt and engaged in a more aggressive presence on Twitter, the the “impact” would be measured in hundreds of millions. Now that Charles Seife has released a more detailed rant – one that openly mocks NASA’s initial response, it will be interesting to see if NASA and its supporters step up or sit this out.
If NASA cannot be bothered to defend and explain itself, then why should anyone be inclined to do so? Maybe Siefe is right after all and NASA is an endangered species.

15 responses to “#WhatIsNASAFor and the Defending NASA”