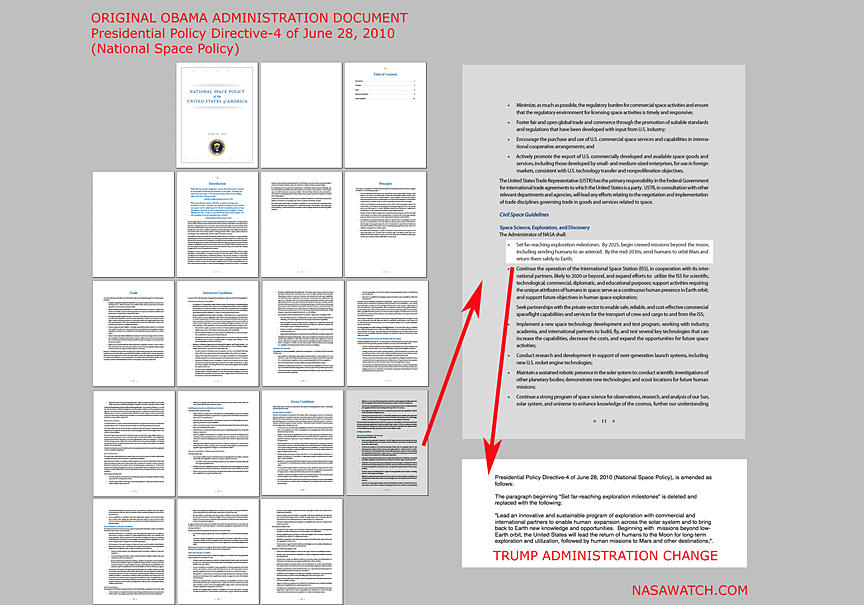 Keith’s note: As former Obama OSTP official Phil Larson notes, the Space Policy Directive 1 issued on Monday only revises a very, very small portion of the existing space policy. Since this White House did not change anything else it is reasonable to assume that they agree with the Obama space policy, as written. Of course, these space policies are iterative and you can trace certain themes back through the Obama, Bush 2, Clinton, Bush 1, and Reagan Administrations – and even further.
To be blunt, Monday’s event at the White House was a hastily arranged photo op with some spoken words. The document that was signed also represents an indication that whatever space policy the National Space Council will eventually come up with will have its roots firmly planted in what has come before. However, Space Policy Directive 1 is also a course correction – a potentially significant one that pivots NASA from Mars (back) toward the Moon – something that is far more significant than the small number of words used to make the pivot.
Space policy is something that transcends Administrations and those who craft and refine it stand on the shoulders of those who came before. Sometimes a few well-placed words can have a disproportionately big impact. Sometimes.

So basically what @RealDonaldTrump did yesterday was merely replace two sentences in the 14-page 2010 @BarackObama space policy … which suggests to me they embraced the rest without amendment including the forward leaning commercial language in it.https://t.co/odtvFBOYOQ

– National Space Policy of the United States of America, June 28, 2010
– Presidential Memorandum on Reinvigorating America’s Human Space Exploration Program, December 11, 2017
“Presidential Policy Directive-4 of June 28, 2010 (National Space Policy), is amended as follows: The paragraph beginning “Set far-reaching exploration milestones” is deleted and replaced with the following: “Lead an innovative and sustainable program of exploration with commercial and international partners to enable human expansion across the solar system and to bring back to Earth new knowledge and opportunities. Beginning with missions beyond low-Earth orbit, the United States will lead the return of humans to the Moon for long-term exploration and utilization, followed by human missions to Mars and other destinations;”.

Keith’s note: Oh yes, and these two guys said this:
Gingrich & Walker: Obama’s brave reboot for NASA, op ed, Washington Times (2010)
“With the new NASA budget, the leadership of the agency is attempting to refocus the manned space program along the lines that successive panels of experts have recommended. The space shuttle program, which was scheduled to end, largely for safety reasons, will be terminated as scheduled. The Constellation program also will be terminated, mostly because its ongoing costs cannot by absorbed within projected NASA budget limits. The International Space Station will have its life extended to at least 2020, thereby preserving a $100 billion laboratory asset that otherwise was due to be dumped in the Pacific Ocean by middecade. The budget also sets forth an aggressive program for having cargo and astronaut crews delivered to the space station by commercial providers.”

Biden Space
Climate Science At NASA: Building Back Better After The Trump Era