Keith’s update: White House Press Secretary Jen Psaki just made the following comments at the daily press briefing: “Kristen … asked a great question about the Artemis program – which I dug into and I am very excited about it now to tell my daughter all about it. So .. for those of you who have not been following it as closely, through the Artemis program, the United States government will work with industry and international partners to send astronauts to the surface of the Moon – another man and a woman to the Moon – which is very exciting, [It will] conduct new and exciting science, prepare for missions to Mars, and demonstrate America’s values. To date only 12 humans have walked on the Moon – that was half a century ago. The Artemis program, a waypoint to Mars, provides exactly the opportunity to add numbers to that, of course. Lunar exploration has broad and bicameral support in Congress, most recently detailed in the FY 2021 Omnibus spending bill – and certainly we support this effort and endeavor.”
We Interviewed the New Head of NASA About SpaceX, China, and Aliens, Futurism
“Question: Your predecessor laid out a lot of highly-ambitious plans, like landing the first woman on the Moon by 2024 and establishing a long-term lunar base. I assume Artemis isn’t being abandoned, but are you still pursuing those same timelines?
Jurczyk: Every indication we have so far, in week two of the new administration, is that Artemis will not be abandoned.”
Message from NASA Acting Administrator Steve Jurczyk and Senior White House Appointee Bhavya Lal, earlier post
“We are excited about the opportunities that await us -the Perseverance Mars landing; the next Launch America mission; our focus on the study of our home planet; and returning American astronauts to the surface of the Moon, and then on to Mars.”

.@PressSec on Space Force: "They absolutely have the full support of the Biden Administration."


“Q: One more space question: NASA’s Artemis Program which was the Trump era program to return American astronauts to the Moon by 2024 – what is the President’s plan – what is he going to do with that program – is he going to keep it intact?
Jen Psaki: I am personally interested in space. I think it is a fascinating area of study – but I have not spoken with our team about this particular program – so let me see if we can get you a more informed overview of that.”

Uncategorized
Blue Origin Is Having A Bad Week

Uncategorized
NASA Usually Ignores Whatever GAO Asks Them To Fix

Uncategorized
Let's Do Some Rocket Math 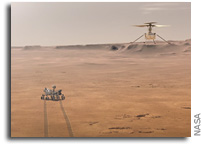 Blue Origin Is Having A Bad Week

NASA Usually Ignores Whatever GAO Asks Them To Fix

Let's Do Some Rocket Math