Crude Leadership At The Space Foundation 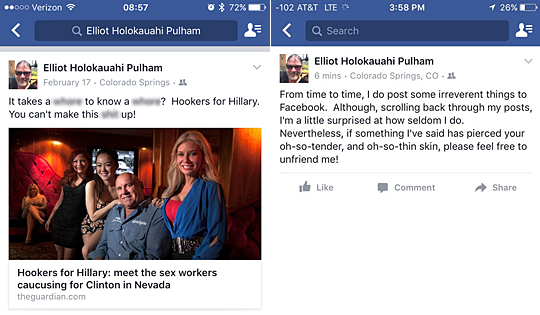 Keith’s 4 October update: Elliot Pulham posted a vulgar, sexist rant about Hillary Clinton [Note: NSFW] on Facebook a few months ago. Apparently Elliot read NASAWatch since he just posted this to all of his friends. He clearly does not care what people think. I am trying to imagine how well the Space Foundation is going to get along here in DC if their CEO thinks that saying things like this is acceptable.

If you go to this page at the Space Foundation you will see the a number of organizations listed as “partners”. I wonder which ones agree with Elliot Pulham’s characterization of a female presidential candidate. Partners include: Coalition for Deep Space Exploration, International Space University, NASA, Space Generation Advisory Council, George Washington University Space Policy Institute, and World Space Week. As for their corporate members, look at the list. Same question applies.

Keith’s 3 October note: According to its website “the Space Foundation is the foremost advocate for all sectors of space, and is a global, nonprofit leader in space awareness activities, educational programs and major industry events, including the annual Space Symposium, in support of its mission “to advance space-related endeavors to inspire, enable and propel humanity.”
If you look at the Space Foundation’s 2013 IRS 990 form they had a total revenue of $7,001,175 for that year. If you read the form closely you will see that the de facto purpose of the Space Foundation is to have a big annual meeting to generate lots of money to pay for things. Not that unusual. For the meeting covered by the 2013 statement they took in $5,617,868 of program service revenue. The remaining $1.4 million of their annual revenue came from contributions and investments.
Of that $7,001,175 revenue in 2013 $3,703,910 (i.e. more than 50% of revenue) was spent on salaries. CEO Elliot Pulham got a total of $292,678. A total of $252,109 was spent on travel and $63,822 was spent on conferences, conventions, and meetings. To be certain the Space Foundation does engage in lots of educational activities. Yet they only gave out $16,900 in grants. Everything else is apparently spent in-house.
Having worked for several education non-profit organizations and been on board of directors of several others, its always been clear to me that the whole idea is to be providing a service to the public. That’s why this corporation has been granted tax-exempt status by the IRS. One of the things that non-profits – especially those with a focus on education – are supposed to do is to keep costs down, not allow luxury perks, and to focus resources on the avowed purpose of the non-profit whenever possible.
However, If you look at the Space Foundation 990 form Schedule J Part III for 2013, 2012 , and 2011 they all say “First-Class Travel Part I, Line la Elliot Pulham, CEO of the organization, received first class travel benefits for airline flights during the year. The benefits to Mr Pulham were non-taxable”. No other Space Foundation employee is called out for receiving first class travel benefits.
Why is anyone at a non-profit education organization getting first class travel in such a frequent manner that it needs to be called out year after year to the IRS? Moreover, why is the CEO of the Space Foundation bragging about all of his First Class travel perks on Facebook to members of the space community? see posts: [1] [2] [3] [4] [5] [6]. Then there’s Pulham’s utterly inappropriate profane NSFW comments about Hillary Clinton – again, sent out to all of the professional space people who follow him on Facebook.
The Space Foundation is one of the pre-eminent non-profits representing the space industry to government and the general public. They seek substantial financial donations from the space community every year to support the advocacy activities cited on their website. Is this public behavior by CEO Elliot Pulham in sync with the lofty goals of the Space Foundation?

Biden Space
Does Anyone Know Where The National Space Council Is Hiding? (Re-Repost)

Biden Space
Does Anyone Know Where The National Space Council Is Hiding?

Does Anyone Know Where The National Space Council Is Hiding? (Re-Repost)

Does Anyone Know Where The National Space Council Is Hiding?
Categories