Just where Is the Space Station, NASA?

Editor’s note: Why is it that this page, hosted by MSFC, one which shows the current location of the ISS (and the shuttle when it is in orbit), only has an incorrectly identified link (titled simply “spaceflight”) to NASA’s official Human Spaceflight page buried at the bottom of a separate links page? Again, why is MSFC so reluctant to openly point to clearly relevant websites hosted by other NASA field centers?

Why is it that NASA’s Human Spaceflight tracking page has no link to MSFC’s ISS tracking page – but links to a different page on its own webserver with the same functionality? Given the time and expense that went into developing both trackers, shouldn’t people be allowed to see both?

Editor’s update: According to NASA MSFC’s Patrick Meyer, one of the developers of J-Track in an email today “I used to be involved in that stuff… but does it really matter what either says? They are both scheduled to be shut down as the push to consolidate everything to the www.nasa.gov “one” NASA portal. They are probably only running in emergency maintenance mode. The new site is run by eTouch which is partially based in India.”

Gee, this guy really exudes enthusiasm and concern for the public face of NASA that taxpayers see. Who cares, eh?

Have a look at the images below – each generated seconds a part: note the time on the upper image (taken from this website at NASA JSC) is shown as 03:39:11 GMT and the time on the lower image, taken from this website at NASA MSFC is shown as 03:39 UTC. In other words, more or less the same time (see this page at science.nasa.gov). As such, the issue is not whether the time is generated from data relayed by a visitor’s computer or from a NASA webserver. Given refresh intervals, things might be off by no more than a minute or so.

That being the case, the ISS is shown as being in two different locations – several thousand miles apart. Clearly, at least one of these locators is incorrect. The fact that this is allowed to continue on two popular NASA websites should serve as further evidence that one part of NASA doesn’t seem to want to work with – or at least be in synchrony with – another part of the agency – yet both sites profess to be accurate.

Of course, this MSFC website still reports (as of 23 March 2001) that Mir is in orbit around the Earth noting that “The Mir space station is 15 years old, and soon its adventure in space will end. The Russian space agency plans to bring Mir back to earth in a fiery descent. Don’t worry, though, it’s headed for the South Pacific Ocean!” What a great learning tool!

According to this page maintained by Dr. Jesco von Puttkamer at NASA HQ (a page which has never, ever been wrong the many dozens of times I have consulted it) the ISS will be visible from my home in Reston, Virginia on 29 November 2004. It will first appear at 6:45 PMEST, will head from West Northwest to West, will be visible for 2minutes, with a maximum elevation of 25degrees above the horizon.

Lets see which of these two websites will have an ISS icon over Virginia when I look up at the sky.

What a great way to “inspire the next generation of explorers”: tell them to go look at a place in the sky for a space station that isn’t there. 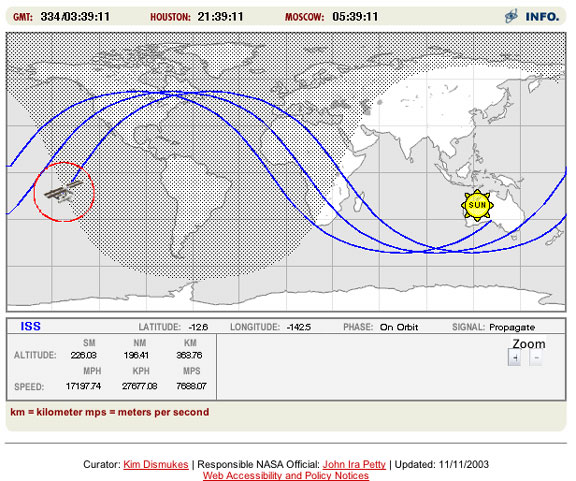 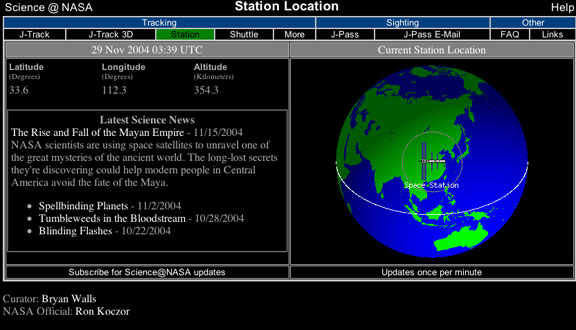